Republican Erin Stewart  is taking time from her  duties at City Hall to jump into today’s Democratic Primary for State Senate and Registrar of Voters,  posting a pitch from her official Facebook page to support the challengers.

In an earlier post on her personal Facebook page Ms. Stewart resorted to name calling that was caught by Courant Columnist Kevin Rennie on his Daily Ructions blog.  Rennie has been a chronicler of Erin Stewart’s foul-mouthed rants and drinking episodes that have been an embarrassment to the city and may come back to haunt the young Republican as she seeks higher office. 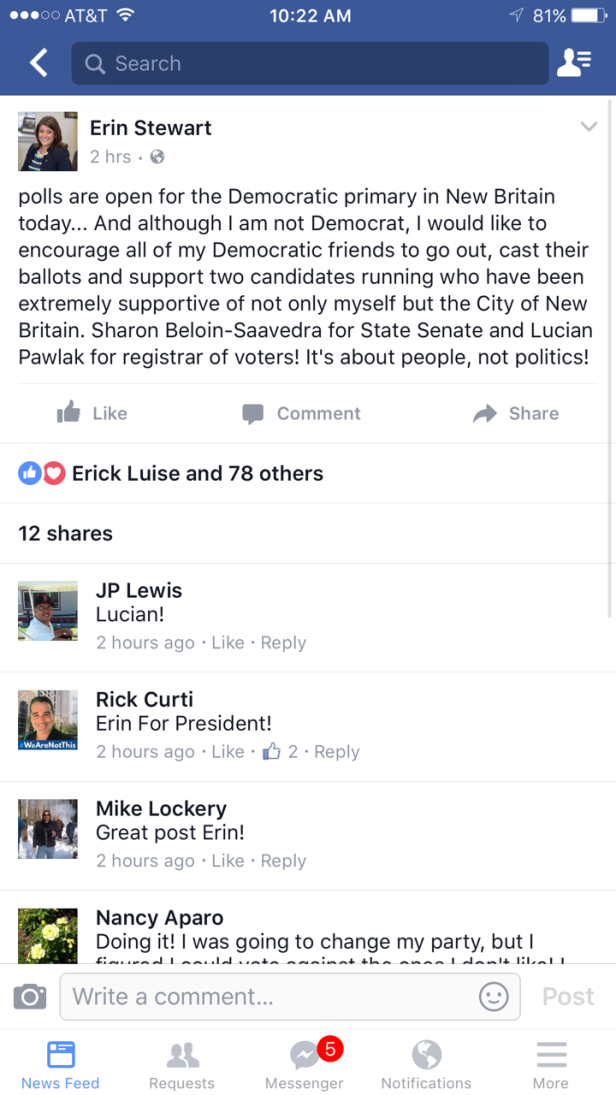 In his pursuit of a return to public office Registrar candidate Lucian Pawlak is relying heavily on Republican financial support.  A fellow Democratic supporter of Pawlak’s recently asked the former four-term Mayor if he would co-sign a letter to the editor opposing the controversial sale of the city’s Patton Brook Well in Southington that is up for a vote this week at the City Council.. Pawlak initially agreed but purportedly backed off telling his supporter that the Stewarts offered to get his committee contributions for the Democratic Primary.  Pawlak, in other words, allowed himself to be bought off on a key public issue.

Beloin-Saavedra, touting her advocacy for education and support of the schools in her challenge, has also embraced Stewart but that embrace has come at a price for what Beloin-Saavedra has said she stands for. When Mayor Stewart illegally attempted to cut $4 million already appropriated for the school budget in her first budget  Beloin-Saavedra never said a word in protest,  acquiescing to the raid on school funds. That was a disappointment for those who have always admired her BOE leadership and advocacy for education through the years. It took New Britain’s Democratic legislators  to block the loss of funds for education.

If nothing else in today’s Democratic Primary  Mr. Pawlak and Ms. Beloin-Saavedra are giving new meaning to the acronym  DINO – Democrats In Name Only.   And contrary to Ms. Stewart’s “people not politics” slogan  it’s about politics, pettiness and self aggrandizement on the city’s dime.